Here at Vivant Vintage, our mission is to give the best objects and apparel of the past the opportunity to live and be loved again. We provide affordable second hand apparel, accessories and housewares as well as local artist made products. We strive to provide an eclectic and fun shopping experience that inspires self expression, great style and person to person connection.

The Meaning of 'Vivant'

Vivant (pronounced vee-vaunt) is the French word for living, or living it up.

The History of Vivant Vintage

Once upon a time, before Vivant Vintage was a store, the founder of Vivant, Justin Pomerleau was known as Le Pants King and the Traveling Spectacular. This is the story about how Justin’s wild idea to sell his thrifted clothing collection in the streets turned into a brick and mortar store with a team of several employees. 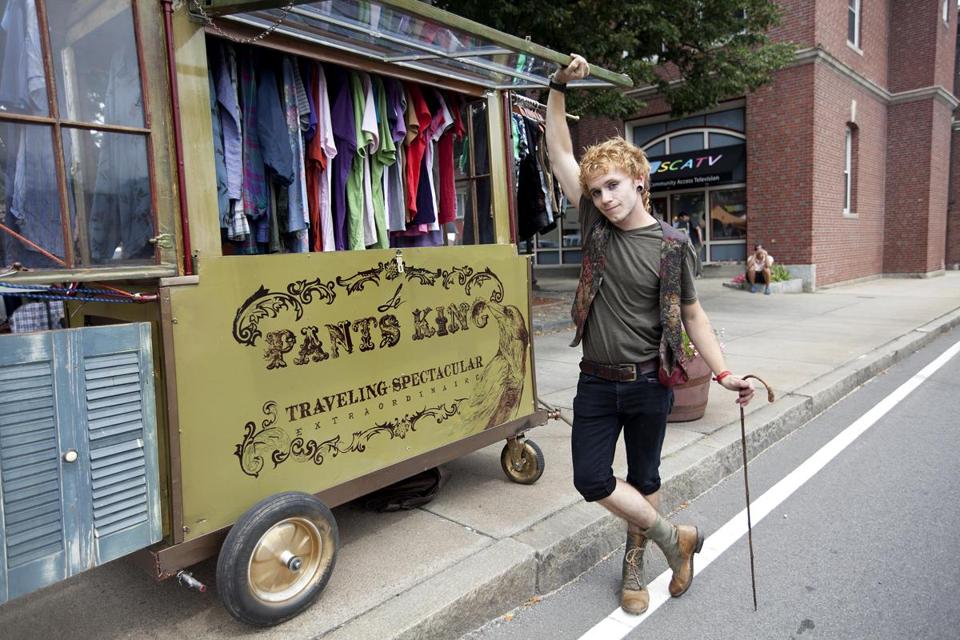 Justin took to the streets of Boston, selling his vintage collection out of the cart he constructed to resemble a tiny house that he pulled by tricycle.

In the fall Justin launched his first pop up shop in the Sowa Vintage Market.

New opportunities and growth came Justin’s way in the spring of 2013. Needing an assistant to help keep up with sales at the Sowa Vintage Market, he hired Emmy.

In May of 2013 Justin was offered the opportunity to sell at the Brimfield Antiques Show. For the July show he was able to acquire a permanent space for the Traveling Spectacular in Quaker Acres and brought Emmy with him to help him sell. Emmy and Justin fell in love at the antiques show that July.

The rest of the year was full of pop up events and festivals such as StarLab Fest in Somerville, MA & Wake Up The Earth Festival in Jamaica Plain, MA.

The next year at the Brimfield Antiques Show, The Traveling Spectacular grew to a 20’x70’ circus-style set up featuring Le Pants King and other young antique dealers.

By the spring of 2014, Justin had secured a space for a permanent set up in Lower Allston, MA. He spent many weeks helping the previous tenant move out and renovating the space the shop is in now.

On June 25th, 2014 Vivant Vintage opened its doors. With the combination of Justin’s gusto and knack for sales and Emmy’s wealth of retail experience they set off together their entrepreneurial journey at the young ages of 24 and 21.

Also in June 2014, Hiero Vega, Justin’s brother, adorned the side of Vivant’s building with a fun inspiring mural that caught the eye of the public.

In 2015 Justin was presented with an opportunity from the City of Boston to host vintage markets in a vacant building. Several local entrepreneurs all put their heads together to create Pop Allston, a community space where people could shop second hand and artist goods, use a free skatepark, take yoga classes and more. Justin created a new brand called Oliver Best Markets to facilitate the vendor booking.

Pop Allston continued until September of 2016. Justin and Emmy continued to run the shop, sell at Brimfield and do local shows with the help of new team members. Oliver Best Markets facilitated booking vendors for New England Open Markets this year as well.

In 2017 Justin expanded his market reach all the way to Nashville, TN. He did several shows in Nashville in 2017 as well as Brimfield and local shows. Justin spent much of the year on the road finding the best treasures from all around and sending them back to Vivant to be sold.

In 2018 Justin and Emmy got married in Mexico. After their honeymoon Justin traveled to Roundtop Antiques show in Texas for a total of 31 days. Justin also began traveling to Brooklyn Flea in 2018 bringing Vivant to NYC for the first time. The home team at Vivant continued to grow to support the home base while Justin spread the word about Vivant all over the country. Emmy began making in house products for the store under the name “Emmy Ember.”

In 2019 Vivant Vintage won Best of Boston- Best Vintage Store! The team continued selling at every Brimfield Antiques Show. Justin began traveling with more of the vivant staff, expanding the number of days of selling at the Brooklyn Flea. In November he opened a Vivant Vintage booth at the indoor BK Flea.